When Samir Kaul made the first investment in Impossible Foods, he had one condition for the plant-based meat company’s founder Pat Brown: that he give up his tenured professorship at Stanford University or forgo the chance at funding.

Mr Brown agreed, and Mr Kaul made an initial commitment of a few million dollars, making his venture firm, Khosla Ventures, a significant partner in the start-up.  “I was getting laughed out of town when I said I was going to invest in a plant-based burger in 2011,”

Mr Kaul said. “I think people really thought I had lost it.” Less than a decade later, Impossible is valued at more than $4bn and has its animal-free meat products in Burger King and Starbucks. Beyond Meat — a close competitor, which also raised its first round of venture capital in 2011 — has quintupled in value since an initial public offering last year and now commands an $9.6bn market capitalisation. The soaring valuations of plant-based meat companies illustrate why more venture capitalists are turning their attention to the food sector: fewer are larger or forecast bigger increases in demand. 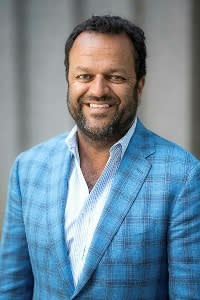 A slice of the action

Now many investors are waiting for their bets to pay off in companies like Impossible that are just beginning to find markets for their products, even if they are not yet profitable. Others are less lucky: like all venture investments, a large number of start-ups are bound to fail and go out of business. Even Beyond Meat has struggled to turn a profit, reporting a net loss of $10.2m in the second quarter of this year. But investors are showing few signs of slowing down, directing more money to bioengineered food start-ups in the six months to June than they did in all of 2019, according to the data provider PitchBook. The pace of fundraising puts the sector on track to raise more than $3bn this year. That sum is a fraction of the amount invested in enterprise software products annually. But the number of new companies in the broader food and agriculture sector has ballooned in the past decade, making it one of the fastest-growing areas for venture capital. 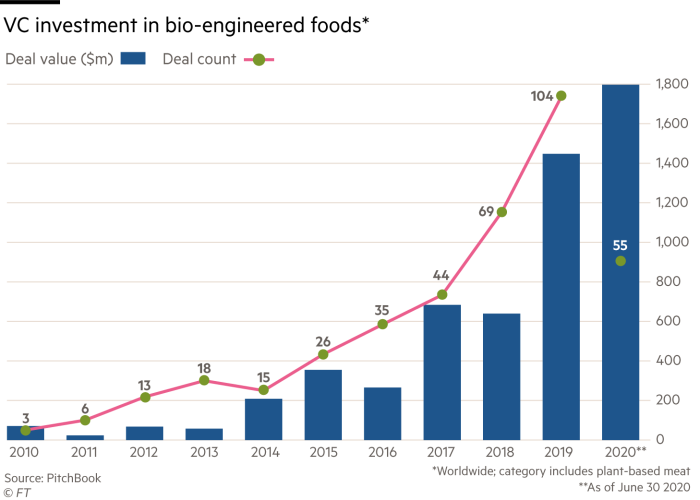 “You were lucky to do one or two [agriculture] investments a year. Now you’re seeing [over 300],” says Jim Kim, founder of Builders VC, which has invested in “agtech” companies including the livestock feed supplement group Native Microbials.

Native, which recently raised $46m in its second round of funding, led by Singapore’s Temasek, is one of the few companies tackling the meat supply chain, an industry dominated by a small group of intermediaries.

Mr Kim says it would have been difficult for the company to sell directly to farmers five years ago, but veterinarians and animal experts have begun paying more attention to consumer demand for health-conscious production standards. “It’s a long sales cycle, but once something tips, you have a billion-dollar product very quickly,” Mr Kim says.

While such valuations are not unusual among Silicon Valley start-ups, few in the agtech sector have reached that milestone.

Venture capitalists say many food and agriculture start-ups have begun focusing on technologies that directly improve farming efficiency, as measured by crop yields, rather than eye-catching products such as drones, which proliferated at the start of the boom. Fruit machine: a robot harvests strawberries. Investors are attracted to technologies that boost agricultural efficiency “Some of the ideas we’ve seen in agtech have been more push than pull,” says Katrin Burt, executive director at Wheatsheaf, which invests in food and agriculture companies on behalf of UK landowner the Grosvenor Estate. “I think the market is responding to that.”  Siraj Khaliq, a partner at London-based Atomico who has invested in the lab-grown meat company Memphis Meats, says he still sees potential in drones and other automated technologies. “It’s almost certainly going to be the way we gather some kinds of field data,” Mr Khaliq says.

Meanwhile, several of the most closely watched sustainable food companies have stumbled after attracting early hype.  Soylent, the meal-substitute drink company backed by Andreessen Horowitz and Alphabet’s Google Ventures, has faced leadership changes. Just, which makes a vegan egg-like mixture, faced scrutiny from the US Securities and Exchange Commission after its chief executive allegedly directed employees to use questionable tactics that boosted sales figures. (The SEC eventually dropped its inquiries.)

Yet investor demand for alternative food products has only quickened. Ms Burt says she has seen some venture capitalists show interest in sustainable food and agriculture companies for the first time after the pandemic heightened awareness of the food supply chain. “It’s actually a sector where the underlying fundamentals are very, very strong,” Ms Burt says. “People need to eat, and the number of people is increasing.”