When the coronavirus pandemic forced healthcare outside of hospitals, healthtech captured the attention of venture capitalists who have rushed into investing in the space.

US healthtech startups inked more deals than their biopharma counterparts this year through August, which will be an industry first if the trend holds, said Katherine Andersen, head of life science and healthcare relationship banking at Silicon Valley Bank.

In total, healthtech drew around $10 billion of US and European VC investment in the first three quarters of 2020, compared to $8.8 billion in the same period last year, according to data from SVB.

“Healthtech broadly has just been catapulted forward by a number of years,” said Andersen.

Much of the momentum was driven by investments in providers of alternative care—a segment that includes services like telemedicine and mental health platforms. The sector accounted for 42% of US and European healthtech funding, the SVB analysis found.

US and European VC investment in healthtech, by subsector 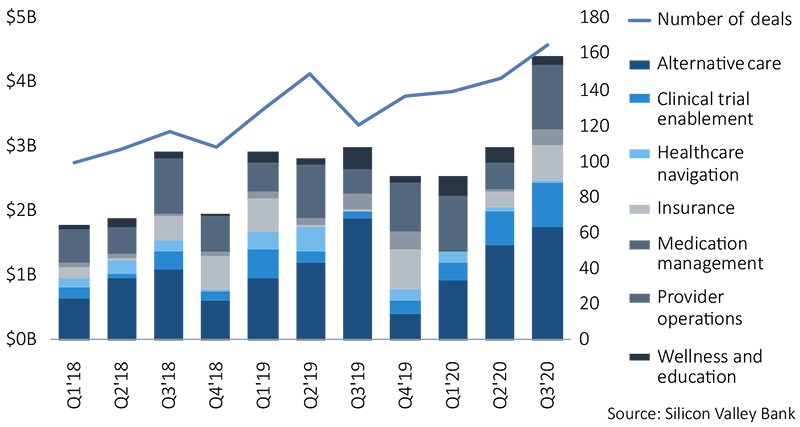 “We weren’t out there pitching at all,” said Cape, adding that the company has received more frequent and serious inbound interest from investors since March.

98point6 credits much of its growth this year to demand from large employers. The company expanded its services to 500,000 corporate employees in April after striking deals with Boeing, Chipotle and others. The average size of its employer customer base has grown tenfold in the past year.

Investors have also plowed tens of millions into telemedicine providers including MDLive, TytoCare and Doctor On Demand this year. Amwell, which operates a virtual care platform, secured a $194 million funding round shortly before raising $742 million in an IPO.

“Anything that helps the healthcare system deliver healthcare remotely is positively impacted in this environment,” said Bill Evans, CEO of investment and research firm Rock Health.

Another area of focus for investors is technology services that enable monitoring away from a clinic, especially for patients with chronic conditions, Andersen said. Remote cardiac monitoring company Preventice Solutions raised $137 million in July. And Biofourmis pulled in $100 million in September led by SoftBank Vision Fund 2 to power its suite of wearables and software for remote monitoring.

Funding in the mental health space has also taken off, with US startups hauling in VC deals worth $1.37 billion in the first three quarters of the year, according to PitchBook data.

The special-purpose acquisition company frenzy hasn’t overlooked healthtech, either. Hims, which provides virtual primary care and mail-order prescriptions, announced plans this month to go public via a merger with a SPAC backed by Oaktree Capital Management.

Much of the increase in alternative healthcare usage could be long-lasting. Seven in 10 Americans who used a telehealth service said they would continue to do so after the pandemic, according to a Gallup poll conducted in April.

Cape said 98point6’s net promoter score has stayed consistent with pre-pandemic levels. The metric, which tracks how likely users are to recommend a service, indicates that the new patients—even those who may have been skeptical of telehealth platforms—may be just as satisfied as existing ones.

Rock Health’s Evans thinks that customers who prefer alternative care services will continue to drive its adoption after the pandemic.

“The needs that existed prior were exacerbated by the pandemic,” he said. “It’s not the case that those needs will disappear.”