A survey of private equity professionals released last Friday reveals these investors are turning their attention away from putting out fires and back to closing deals. This is positive news for entrepreneurs looking for an exit. However, don’t expect new investors knocking on your door anytime soon — most investors are focusing on closing deals they already have in the pipeline. There are also a few signs that investor confidence might be short-lived.

Related: A New Breed of Private Equity Investors Present More Exit Options Than Ever for Entrepreneurs

Investors will focus less on putting out fires

The survey was conducted by my firm, ECA Partners, which specializes in helping PE funds and their portfolio companies achieve their growth targets through a range of executive search, interim placement and consulting solutions. It is the third survey of PE professionals that ECA Partners has conducted since the lock downs began in April.

The most recent survey indicates that 50 percent of investors are expecting to spend more time over the next six months on portfolio company cost reduction and cash management, down from roughly 87 percent of investors holding the same view when surveyed in April and 81 percent in the May survey (see figure 1). 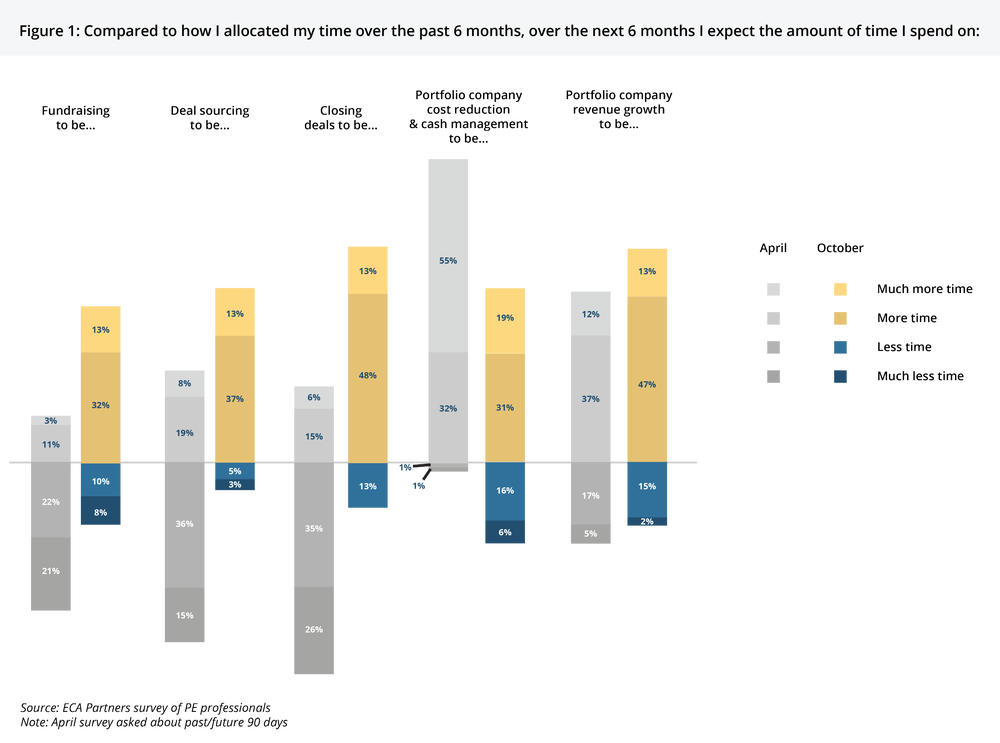 A tsunami of deals

The survey reveals that PE investors are optimistic about closing deals over the next six months. About 61 percent of investors are expecting to spend more time closing deals over the next few months, up from 21 percent holding the same view in April and 28 percent in May. This is the first appreciable shift we’ve seen since the onset of Covid-19, one that suggests growing optimism about deal activity and the PE sector in general. .

This optimism is likely  influenced by a pickup in deal activity during the summer. Although deal activity ground to a halt in April and May, there were over 5,500 PE deals in the first nine months of 2020. This is the highest year-to-date number of deals since records began in 1980. However, these acquisitions were overall worth about six percent less than over a similar period in 2019, indicating that, under Covid, PE firms are focusing on smaller companies.

Related: Six Ways In Which Private Equity Can Catalyze The Growth Of Your Business

How long will the acquisition spree last?

Although the increase in acquisitions is cause for optimism, concerns about the sector remain. Fundraising by PE firms has fallen by a fifth in the first three quarters of the year compared to 2019. This decrease in available funds will eventually mean fewer acquisitions across the PE sector. However, PE firms also entered the year with a $1.5 trillion cash pile, a record amount — something that could mitigate or at least delay the effects on deal activity from the 2020 decline in fundraising.

Because private equity deals are almost always partially financed by leverage, deal volume will also be driven by the willingness of lenders to underwrite deals. As noticed in Q2 of this year, traditional sources of acquisition financing tend to become less willing to underwrite deals as the degree of uncertainty in the economy increases. If 2020 has shown us one thing, it is the unpredictability of economic uncertainty, and how deeply it can be influenced by non-economic factors, such as the pandemic or political instability. It is thus easy to imagine scenarios in which further instability or another exogenous shock derails the current recovery and injects more uncertainty into the equation.

What this all means for entrepreneurs

If you are a business owner who’s thinking about selling your business, my advice to you is to think more about the big picture rather than trying to over-engineer every detail. Take a step back and think about how long you’d like to continue running your business. What are your life aspirations and financial needs? And then think long and hard to understand how flexible your plans are. For example, would you be willing to work a few years longer if deal activity drops again and you are not able to find the right investor for your business?

To illustrate, consider this famous example from the adjacent sector of VC-backed startups. In 2019, Uber CEO Dara Khosrowshahi was widely criticized for running a “train wreck IPO,” leading to what was called the biggest IPO flop in history. Critics pilloried Khosrowshahi for only fetching the bottom range of his $44 to $50 per share target price range at the IPO. A number of circumstances, including the poor post-IPO performance of its competitor Lyft two months earlier, led to the decision to come in at the low end of the target price for the over-subscribed IPO. Investors at other Silicon Valley companies, such as Postmates, saw this as a sign of the timing being poor and consequently postponed their IPOs. But in hindsight, Khosrowshahi looks clairvoyant. How many of his 2019 critics now appreciate the fact that he took Uber public before the global pandemic reduced the demand for the company’s services?

In other words, if you can avoid it, don’t sell a company you’ve worked hard to build in a fire sale. At the same time, if you are thinking about exiting, don’t lose sight of the forest for the trees. There are still plenty of buyers out there. As long as you are looking for a reasonable offer, you are likely to find a suitable buyer.