KUALA LUMPUR (July 28): Malaysia’s exports grew 8.8% to RM82.9 billion in June, exceeding market expectations compared with a 25.5% contraction in May.

The Department of Statistics Malaysia (DOSM) said the export growth in June was attributed to higher exports to China by RM4.7 billion, the US by RM2.1 billion and Hong Kong by RM1.4 billion. 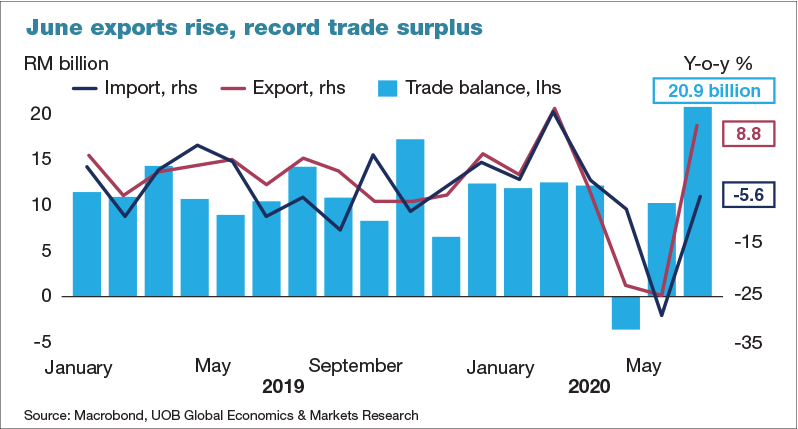 UOB Malaysia senior economist Julia Goh and economist Loke Siew Ting, in a note, said Malaysia’s June export performance led the region, which could be attributed to a diversified export base, easing of supply-chain disruptions, resumption of production to fulfil backlog of orders, and release of pent-up demand.

The sectors that experienced a drop in imports were petroleum products (-RM2.4 billion), transport equipment (-RM1.7 billion) and crude petroleum (-RM1.1 billion), according to DOSM.

Goh and Loke said the stronger-than-expected exports augur well for June’s manufacturing production, which will be released on Aug 7, and infer a narrower second-quarter of 2020 (2Q20) gross domestic product (GDP) decline.

“Our current estimate for 2Q20 GDP is -12% y-o-y but may be subjected to revisions upon release of June’s industrial production, and wholesale and retail trade data,” they said.

Domestic exports, which involved high value-added activities, rebounded to a four-month high of 9.5% y-o-y to RM70 billion in June, supported by an increase in sales of electrical & electronics, palm oil, machinery, optical & scientific equipment and rubber products, among others.

Similarly, re-exports came in at RM12.9 billion, registering an increase of 5.3% y-o-y and accounting for 15.5% of total exports, said DOSM.

Looking ahead, the pace and strength of export recovery in the second half of 2020 (2H20) will depend on sustainability of production and demand, said UOB, adding that there are lingering risks amid signs of a new wave of Covid-19 infections across the region.

The higher base effect in 2H20 would also infer a moderation and uneven growth trend over the coming months.

ING Asia senior economist, Prakash Sakpal, warned that Malaysia’s trade strength in June was transitory and was likely to be reversed in July.

“While the second wave of Covid-19 cases will continue to weigh on exports, the base effect is poised to become unfavourable. This is likely to cause a sharply negative turn in export growth. The same can be expected for imports, as these largely feed into processing for imports, while domestic demand continues to take a beating from the virus,” Prakash said in a note.

On a positive note, UOB’s Goh and Loke said oil exports should gradually recover in line with OPEC+ agreement to ease output restrictions from August.

“Meanwhile, Malaysia’s diversified export base and potential new demand from reorientation of supply chains should remain supportive. As such, we are revising our full-year exports to reflect a narrower decline of 3.5% in 2020 versus a previous estimate of -10%,” they said.